Do You Have Soy Allergies?

Soy allergy is one of the “Big 8” most common food allergies (alongside eggs, milk, wheat, fish, shellfish, tree nuts and peanuts). It can cause a host of reactions, ranging from mild to severe, and it can be difficult to avoid due to the prevalence of soy in our diet. 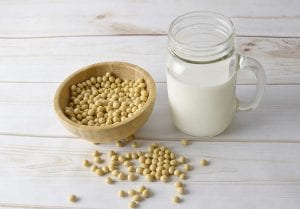 Soybeans are part of the legume family, the same family as peanuts, lentils and peas. However, just because you have soy allergies doesn’t mean you are more prone to allergies to other legumes. (There is no relation between soy allergies and peanut allergies, for example.)

Who is affected by soy allergy?

Roughly .4% of kids are allergic to soy. The majority of children outgrow this allergy by the time they are 10, though some continue to react to soy into adulthood.

Why does my body react to soy?

This, of course, isn’t necessary. After all, soy proteins are harmless. However, this is exactly what allergies are! They are an overreaction of your immune system to substances in the environment. Allergies occur when your body perceives something benign as a harmful germ and releases chemicals (such as histamine) in an attempt to get rid of it. The result is that you end up with a bunch of chemicals in your body that cause all of those symptoms that can make you miserable.

What are the symptoms of soy allergy?

Symptoms usually start within minutes to hours of exposure to soy.

Who is at risk?

If you or anyone in your family is prone to hay fever, asthma, hives or eczema, you have an increased risk for soy or other food allergies.

What foods should I avoid if I have a soy allergy?

The obvious choice is to avoid soybeans, but those aren’t a big part of our American diet. However, soy is found in many other foods. It is particularly prevalent in Asian dishes. It is also a mainstay in vegetarian and vegan diets because it is a good non-meat protein source. If you have a soy allergy, you should avoid:

Fortunately, legislation passed in 2004 began requiring food manufacturers to list soy-based products on food labels. If you or your child has a food allergy, make sure to read food labels carefully as soy can lurk in unexpected places, including baked goods, canned broth or soup, energy bars, infant formula, processed meats, and some cereals.

Is there a treatment for soy allergy?

While avoidance has long been the only way to deal with food allergies, there are now other options in the form of newly developed food allergy treatments. These don’t just allow you to sidestep the problem of food allergies—they hit food allergies head on. These treatments, which include oral and sublingual immunotherapy, work much like allergy shots for pollen allergies. They expose your body to gradually increasing quantities of food proteins and help you develop immunity to these proteins.

At AllergyEasy, we prescribe sublingual immunotherapy food allergy treatment for dozens of the most prevalent trigger foods, including soy, milk, wheat, tree nuts, eggs and more. With a few daily drops under the tongue, you can train your body to tolerate more of the foods you love and that your body needs in order to stay nutritionally balanced.

Food allergies are increasing dramatically. It’s now estimated that an average of two children per school classroom have some kind of food allergy! Additionally, more than 45% of people with food allergies report reacting to more than one type of food. These multiple food allergies make it hard to avoid trigger foods without missing out on important nutrients. If you or someone you know is dealing with soy allergies—or any other type of food allergy—contact AllergyEasy to inquire about sublingual immunotherapy.

Allergy Easy > Allergy Information > Do You Have Soy Allergies?