So your child has allergies. Should you treat them aggressively? What are your options for pediatric allergy treatment? Do they need to be at a certain age to start treatment? Should you just leave it alone and hope that their allergies go away—then attack the problem later if it persists?

If you have a child with allergies, you may be weighing all of these questions. In this article, we’ll take a look at what the current research shows and how you can help your child in the most effective way. 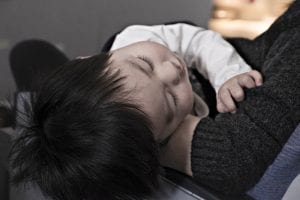 New research is centering on a progression known as the “allergic march.” This describes the progression of atopic disorders from atopic dermatitis in babies to allergic rhinitis and asthma in children, teens and adults.

Allergies usually manifest as skin irritations, including eczema and hives, in the infant years. From there, food allergies can develop, often surfacing in the toddler years.

Environmental allergies (to pollen, dust, mold, etc.) will often develop in early childhood, characterized by allergic rhinitis (sneezing, runny or stuffed up nose). The inflammation and mucus production of allergic rhinitis can also lead to chronic ear or sinus infections. These allergy symptoms may be followed by the onset of respiratory symptoms, including asthma.

The allergic march is influenced by a tangle of factors, to include genetics, environment and diet. It shifts from one organ to another as patients age. While there is still more to be learned about the allergic march, studies show that if you treat allergies at a young age, you can slow down or even stop its progression. This can help minimize recurrent allergy-related illnesses, surgeries and chronic allergic disease later in life.

Treating a child using medications (antihistamines, decongestants, steroids) will only address the symptoms. These medications have no significant effect on the progression of the allergic march.

The problem with allergy shots is that they are not often prescribed until a child reaches age 7. This is not necessarily because kids are more likely to have an anaphylactic reaction but because they may not recognize the signs of the reaction (like their throat closing off, etc.). But unlike shots, sublingual immunotherapy has been shown to be safe for children under age 5. As such, it can be administered early to help minimize the effects of the allergic march.

The PAT Study (Preventive Allergy Treatment) famously showed the impact of immunotherapy on slowing the allergic march. It showed that three years of allergy shots in children with seasonal allergic rhinoconjunctivitis lowered the risk of developing asthma during treatment. A 10-year-follow up shown long-term clinical effects, with “significant improvements in rhinoconjunctivitis and conjunctival sensitivity persisting seven years after children stopped their immunotherapy treatment.”

Another study shows the specific effects of sublingual immunotherapy on the allergic march: “New promising treatments have become available, such as the administration of sublingual immunotherapy. In the future, it is anticipated that therapies that modify the severity of atopic eczema in infants and young children will decrease the risk for the eventual development of asthma and thus prevent the consequences of the allergic march.”

If your child is struggling with allergies, don’t wait. Whether they are dealing with hay fever (which may seem like a perpetual cold), recurring ear infections, food allergies, coughing or asthma, talk to your AllergyEasy doctor. It never hurts to intervene early, and, as we have shown in this article, there is strong evidence suggesting that early intervention can have long-lasting, positive effects on your child’s health.

As more people seek out early intervention for their allergic children, they are drawn to sublingual immunotherapy (SLIT). SLIT was born out of safety concerns surrounding allergy shots, which carry a higher risk for an anaphylactic reaction. Indeed, SLIT boasts a more favorable safety profile for all ages, especially kids. It is also a natural allergy treatment consisting of the same antigens that your child encounters in nature mixed into a saline solution. With SLIT, you won’t have to worry about the side effects that come with synthetic medications.

And most importantly, with sublingual immunotherapy, you can begin the important work of desensitization at a young age. With medications, the symptoms keep coming back, but desensitization offers a permanent resolution. Most children show marked symptom improvement in the first few months of treatment. The standard recommendation is that children stay on the allergy drops for a few years because it takes time to completely retrain the immune system. But once this retraining has taken effect, your child can enjoy life without the symptoms that made their life miserable—or without the potential for those symptoms to progress into other allergy-related illnesses.

A few memorable patients come to mind. One child spent his first few years on Earth under the shadow of allergic rhinitis. It was the cold that never left—and that earned him the nickname “Slimy” because one of his most distinguishing factors was his constantly runny nose. Another child had eczema so bad that you could barely see his true flesh for all of the raised red patches that covered it. They would itch and crack and ooze and kept him from sleeping at night.

Both of these children were too young for allergy shots, and medications weren’t cutting it. Ultimately, it was sublingual immunotherapy that brought them relief. We’ll never know what their future life would have been like without this early intervention, but if the research is any indicator, we can guess that it likely contributed to relieving not just their childhood health problems but also to preventing or minimizing other allergy-related challenges that may have developed.